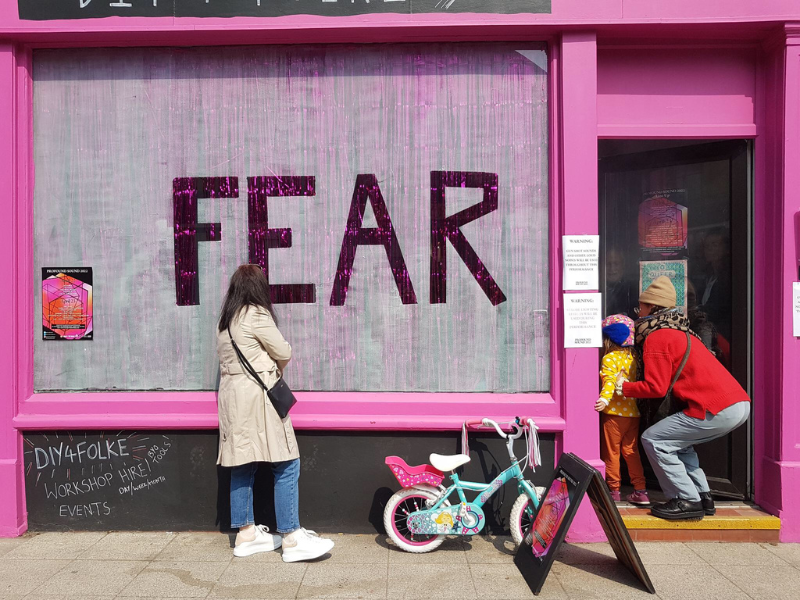 'With each organisation bringing their own perspectives and practices to the table, we truly feel that we were able to eliminate some of the intangible barriers that often separate us from each other, alongside crafting the space to interrogate, and candidly discuss our differences. The similarities between Leipzig, Hawick and Folkestone allowed for us to find so much of ourselves within each other and our separate practices.' Rhiana Bonterre from Folkestone Fringe on the project, read more on their website .

The BRIDGIT 'Building Better Bridges' project brought together three organisations from Germany, Scotland and England, all of whom are situated near major borders. Fine Arts Institute Leipzig/Institut für bildende Kunst (FAIL), a collective of artists and producers creating formats that are based on radically honest creation, mediation and reception of contemporary art, are based on the East/West German border. Alchemy Film & Arts, who work with communities and artists both locally and internationally and use film as a way to come together, have conversations and make positive change, are based on the Scotland/England border. Finally Folkestone Fringe, a grassroots, artist/producer-led, organisation committed to creating opportunities for artists, are based on the England/France border by the channel.

The project aimed to share learning, exchange expertise and develop new approaches to socially engaged practice. By meeting regularly online and then in person, BRIDGIT was rooted in their communal commitment to strengthening communities and working to expand understanding between them, through the recognition and breaking of both tangible and intangible borders. 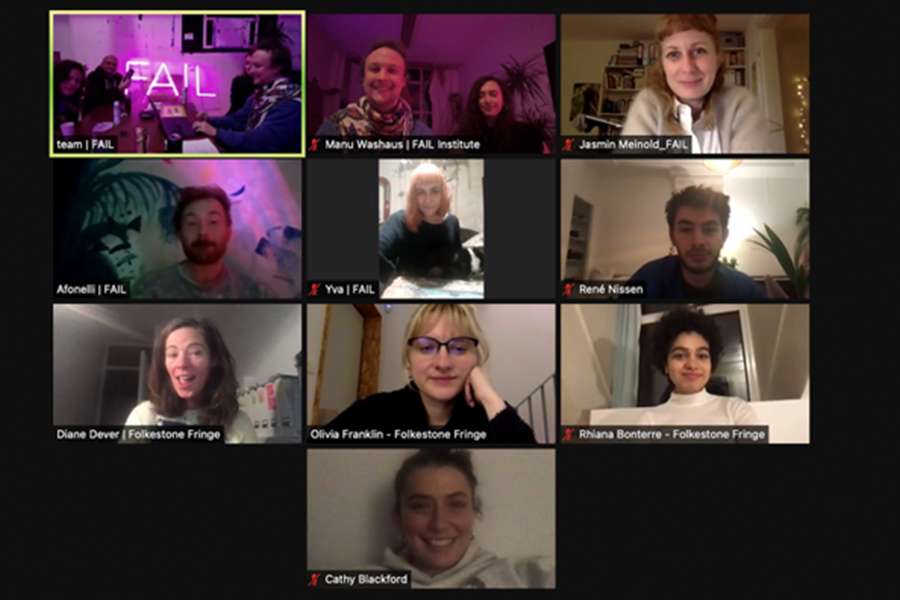 In the weekly online meetings, the team members learned about their different structures, experiences, and expertise, histories, the political and social circumstances they are working in, failures and successes. Not only did they share insight into their organisations and practice, but they also developed new ways of online sharing and collaboration:

'Our zoom meet up sessions functioned more like workshops - the openness and comfortability created through this space served as a strong source of nurturing these ideals we all associated our work with. Every week was an opportunity to explore each other's practices, and the different ways our common goals were carried out in different spaces culturally, politically and geographically. In spite of the purposefulness and intention cultivated through each encounter, it was equally accompanied by a light playfulness that allowed us to connect with each other in the ways that we did. Virtual parties packed with fun world games and riddles, hosted by each organisation became a theme, and really laid the foundation for the way we approached learning from one another when we were finally met with the opportunity to meet in the flesh.'  Rhiana Bonterre from Folkestone Fringe 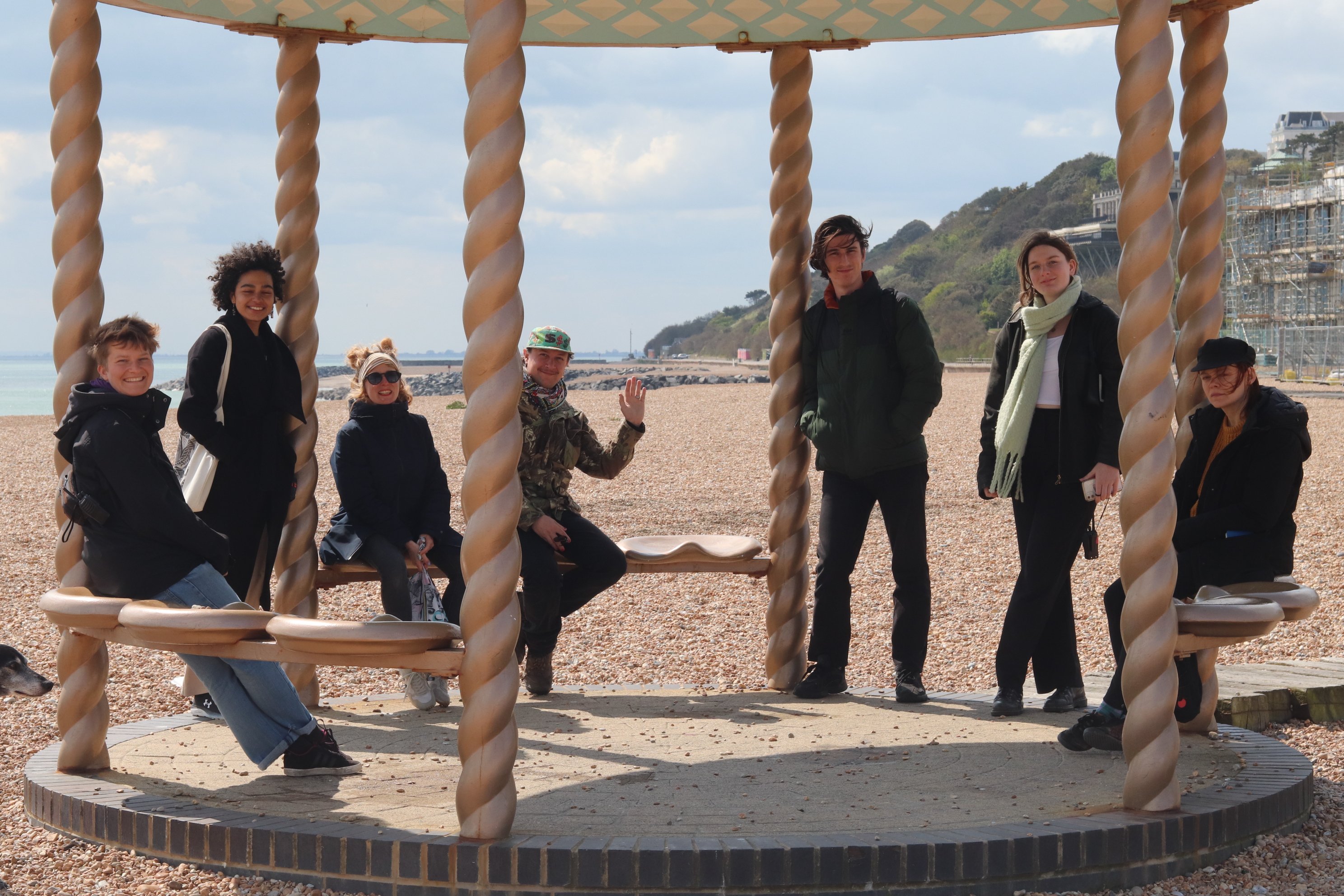 The organisations finally came together for their first in-person exchange in April 2022, when FAIL team members visited Folkestone Fringe during their experimental sound and music festival, Profound Sound. Not only did they explore the town and witness some of the festival programme in action, but FAIL also produced two works  - they performed To the Rhythm of Fear, billed as 'an experiment to find the rhythm of conflict and make sense of the constant stream of noises from FAIL, Folkestone artists, and yourselves in the form of a live drum alliance'. where they invited the community to partake in an 'epic drumming session complete with fog, balloons and flashing lights' and they also hosted Raise a Glass to Fear in one of the festival bars, featuring a live DJ set streamed from Leipzig. 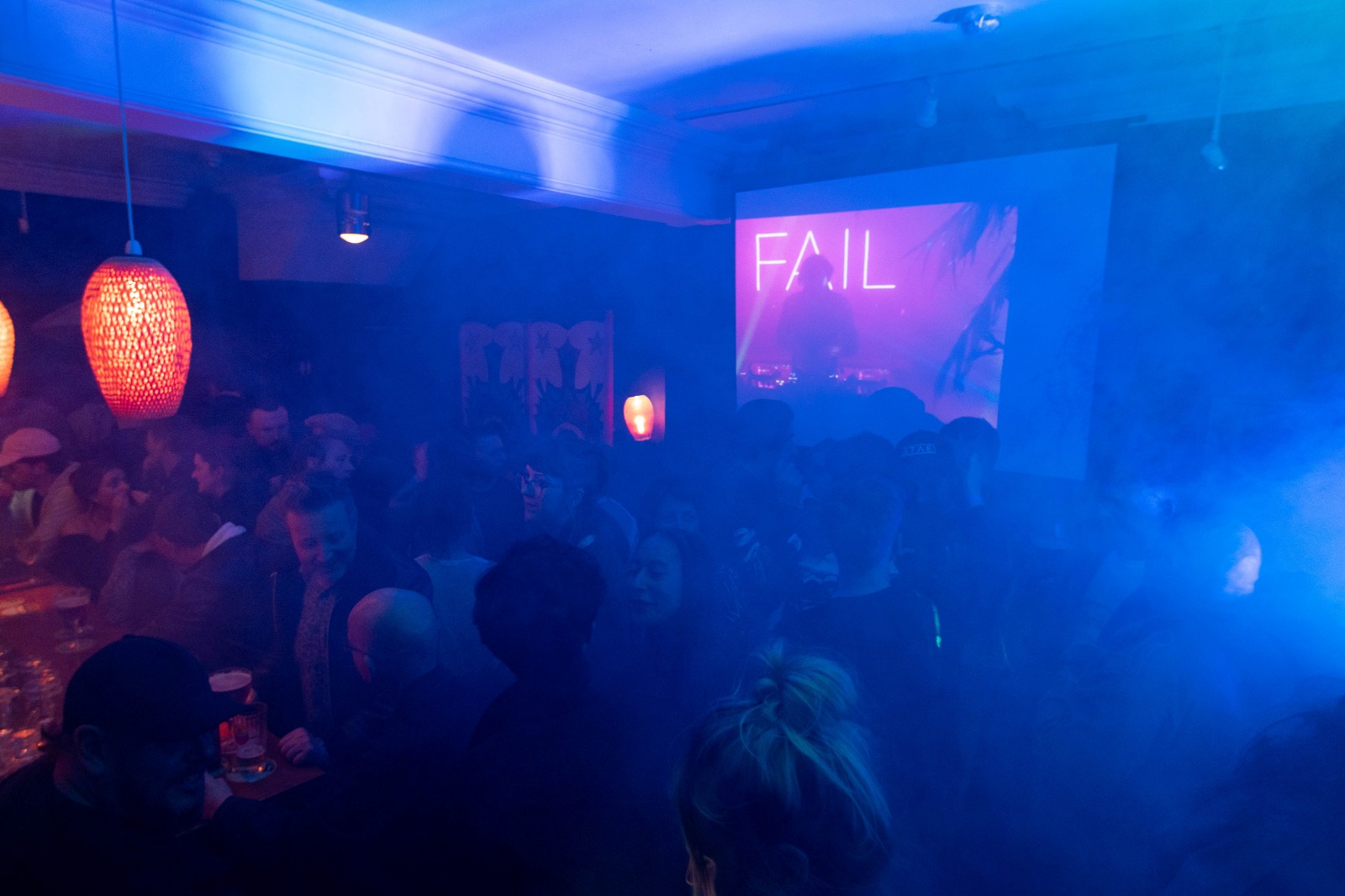 Team members from Folkestone Fringe and Alchemy Film & Arts then took a trip to Leipzig in Germany in May 2022 where they spent a lot of time together in FAIL's space and also exploring and connecting with the town Thallwitz, where FAIL has been successfully exploring how to build trust and relationships with the local community. 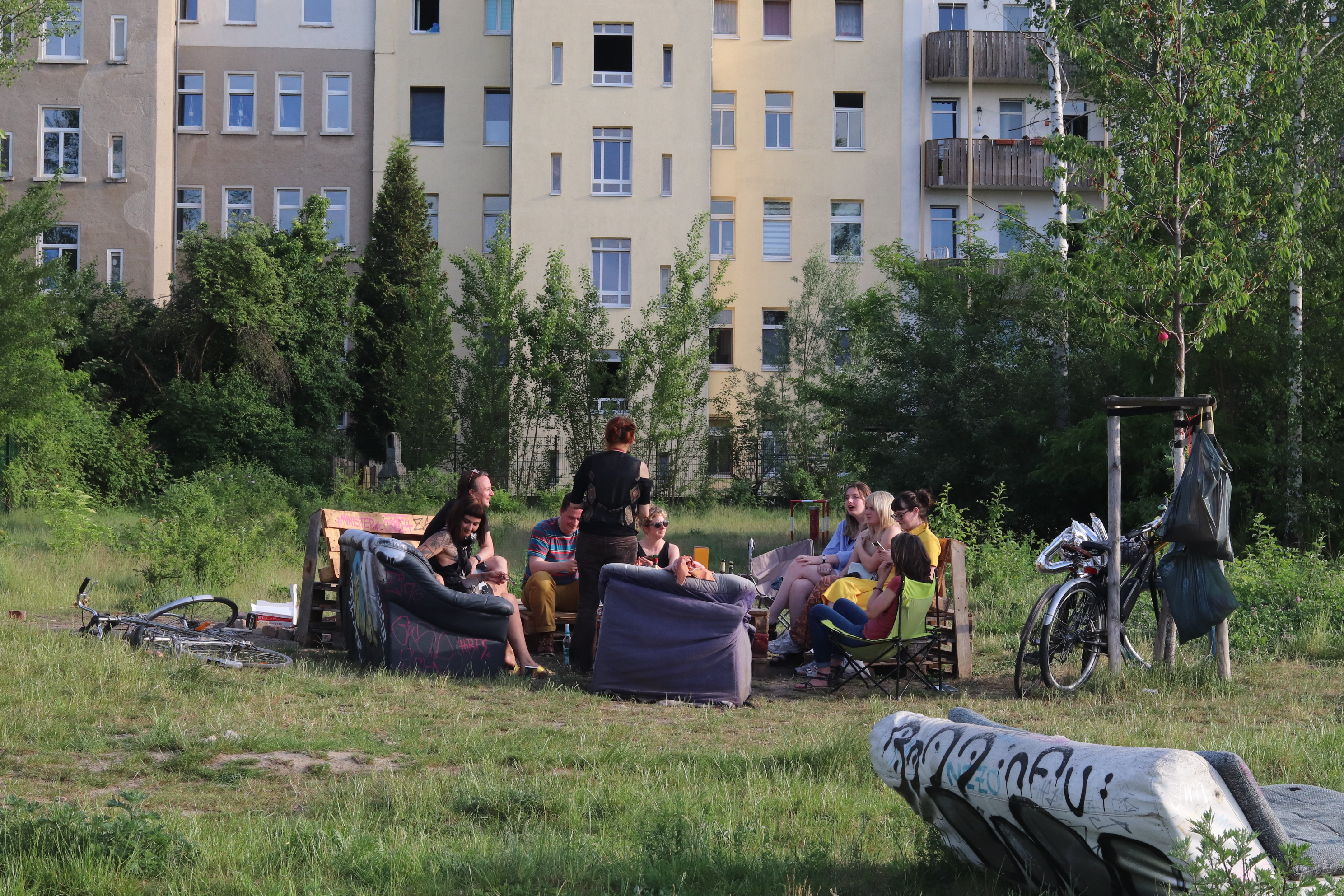 'One particular favourite memory of mine, despite the whole long weekend feeling like it was just meant to be, was visiting the village of Thallwitz. In combining the environment, the architecture, and how through this, the community cared for one another, made the presence of the place feel almost overwhelming - like I almost couldn’t believe such a place exists. This presence wrapped up alongside the pathways of the people who had come before us, and how history had shaped this place to be now, allowed the work of the FAIL team to truly shine through - to the point of a picture which will always stick with me – as we ended up in the living room of project member/ Thallwitz resident / poet in her own right ... as Elvis records played, stories were shared, as we drank the bubbles of the trip together. Transgressing language and the borders which have attempted to pull us apart in recent years - it felt closely familiar, and like I’d been in that living room before.'  Olivia Franklin, Folkestone Fringe 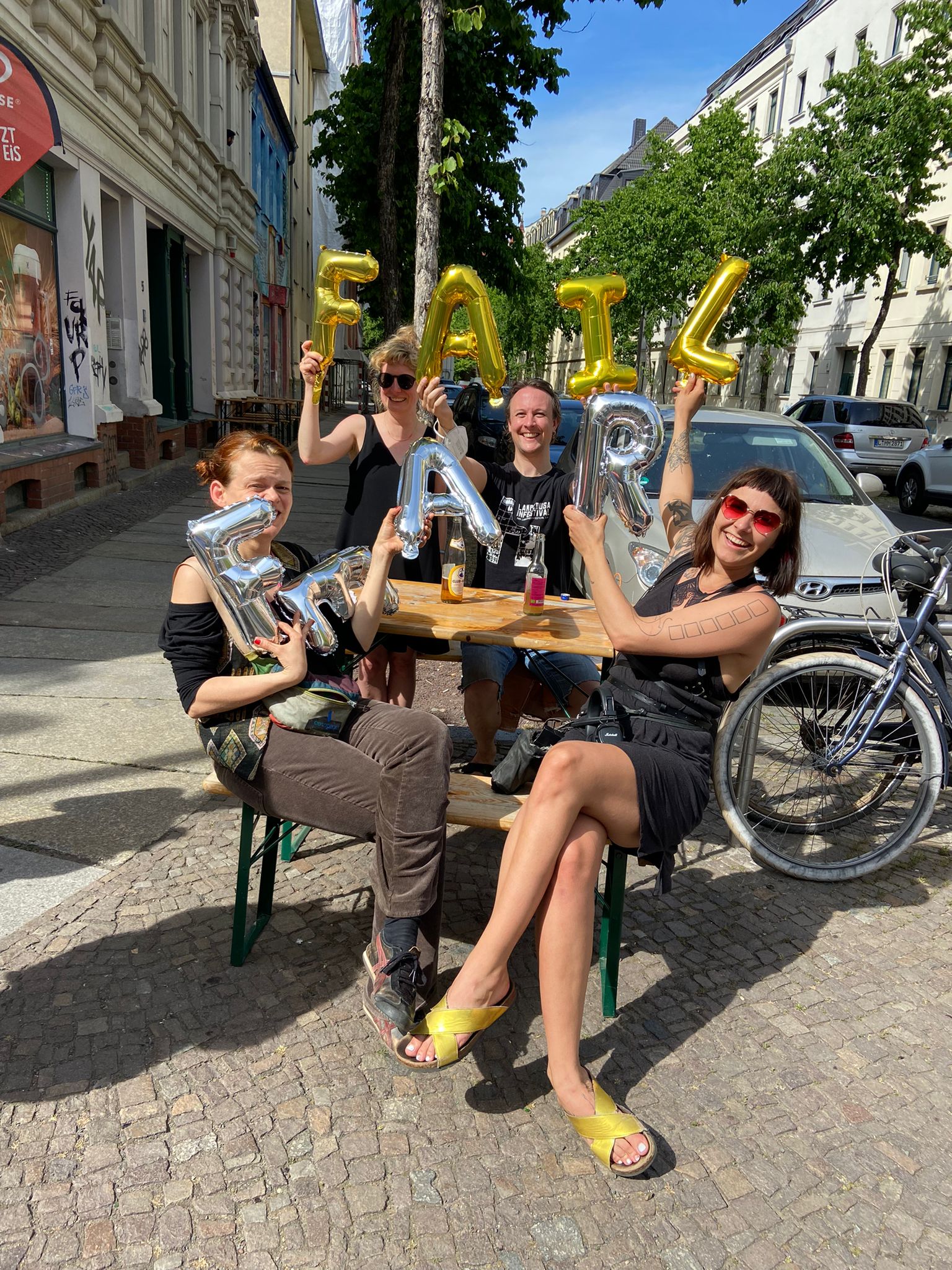